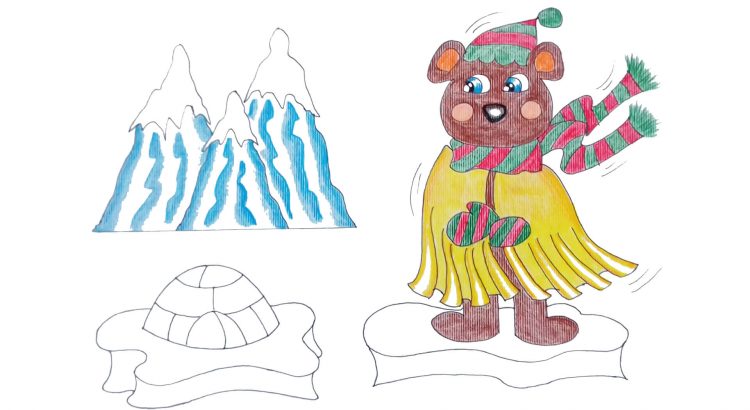 Cold autumn came a long time ago. Dark grey clouds hid the warm rays of the sun, and there were but few nests remaining in the trees, shivering under the strong puffs of wind. Winter is around the corner. A bear left his cave in a hurry. Instead of enjoying the warmth of his home, he decided not to sleep through the winter this year. He was getting ready to leave the forest and did not have any time to waste. He packed a few pears, a jar of honey and some berries, so he could have a snack along the way. He made swift strides down the forest road, which lead to the city. He left his cave and didn’t look back. At the edge of the forest he met a lynx and a wolf, as they were coming back from a hunt.

“Where are you going with that luggage?”, his friends asked in astonishment.
“I will not be sleeping in my winter sleep this year. Instead of staying in my cave, I have decided to go to the Arctic and spend the cold days there.”
“Arctic?”, asked the wolf, wondering, “Well, it is so cold out there. There is nothing except ice and snow. It is not a place for you.”
“There are a lot of polar bears. They are having a lot of fun, hunting and sledding. If it is good for them, so it will be for me as well.”, said the bear, a bit insulted that the wolf is questioning his decision.

His friends could see he is determined to follow through with his plan and wish him a safe travels. After a long journey, the bear reached Arctic. There he met the polar bears, who welcomed him with open arms. The first days of his stay in the polar kingdom were filled with joy. He skied, sledded and skated all around the icy vastness.

However, he soon ate all the honey and all the pears he brought with him, so he had to hunt. He was not very good at hunting seals. The water where they were hiding was too cold, and the seals were too good a swimmer. So the bear was going hungry more and more, and spent less and less time sledding and enjoying the snow. One night he fell asleep on an iceberg and started to dream.

He dreamt about his warm cave, his forest and his friends, the lynx and the wolf. He could see in his dream a jar of honey he left for himself, as a treat for long winter nights. And then the cold wind woke him from his sleep.

The very next morning, when the polar bears came to wake him up, so he can go sledding with them, on the iceberg where he used to sleep they found a note:

“Your land is so cold and nice
But I don’t like the snow and ice!
I want my cave and my wood,
I miss my old neighborhood!
Enjoy in skit, fun and play
We will meet again some day!”